More on the politics of high gas prices.

In the last post, we noted that the political response of the US public to high gasoline prices is, how shall we say it, more severe than the political response to high healthcare costs.  And therein poses a dilemma for progressives.
For many reasons, high prices for gasoline (and other fossil fuels) are generally a good thing.  Burning fossil fuels is bad for the environment, and many of the ways of extracting petroleum are likewise damaging.  Many petrochemical companies are notoriously bad actors.  Maintaining access to cheap foreign oil also requires us to deal with some rather unsavory states, and get involved in military adventures that would otherwise be considered unwise.  It's not exaggerating to say that cheap gas is paid for in blood, not just dollars.
However, high prices for gasoline is also a bad thing for several reason:  First, it is a major retardant on the economy--its an ever-present tax, sucking the lifeblood out of our markets and sending it overseas, where it often pays for who-knows-what.  Second, it has a particularly harsh impact on the poor, for whom transportation is a bigger percentage of the budget--and who are also impacted by higher prices for food and other necessities.  And lastly, if you care about Barack Obama beating the GOP candidate, likely Mitt Romney in the election, it's not good news.
One of the interesting paradoxes of US politics is that presidents get blamed for high gas prices, even though (in the short term) there is precious little they can do about it directly.  President Obama's poll numbers have dropped recently, though whether that is due to energy prices or some other reason is currently unknown.  (In fairness, it must be noted that he attacked the GOP for high gas prices during the 2008 campaign).  Price controls and other aggressive measures of that sort are pretty much off the table.  Increasing domestic production takes years to have an effect.  That hasn't stopped Newt Gingrich from promising $2.50/gal gas if elected, an idea which the White House has dismissed, though The Atlantic notes that it could be done by subsidizing the stuff to the tune of $190 billion.
While The Atlantic's proposal as given is bad--subsidizing gasoline strikes me as intelligent as subsidizing cigarettes--it wasn't meant to be taken seriously.  (Or at least that's what I'm assuming, graciously giving the editors there the benefit of the doubt).  But on the other hand...
Energy tax credit?
The main problem with The Atlantic's snarky suggestion is not that it involves a subsidy--but that the subsidy only goes to the purchase of gasoline.  But what if $190B, or some other figure, were made available to instead subsidize energy or transportation?  What if every taxpayer got a lump-sum tax credit to offset rising energy costs, one that wasn't tied to any particular form of energy?
With a gas subsidy, those who drive a Ford Expedition to work would get more money back than those who drive a Honda Civic, and the Civic driver would get more back than those who drive a Chevy Volt, ride a bike, or take the bus to work.  It would directly reward the deleterious behavior.  Such a subsidy would also fail on the equity front, as the poor are more likely to be those not driving.  (Transit riders might benefit indirectly if a subsidy would assist the transit agency with its diesel purchases).  And, Big Oil would be the primary beneficiaries of such a windfall.
With a broad energy credit, on the other hand, the negative impacts of high oil prices on the economy would be mostly offset, but the marginal cost of buying gas would not be offset.  This would maintain the advantage of high oil prices--encouraging alternate forms of energy--but not drag down the economy.  And it would be particularly beneficial to the poor, who would appreciate the credit more than most.
I must emphasize that this is a neutral credit--it isn't tied to alternate energy.  Those who wish to keep a gas-guzzling lifestyle not be prevented from doing so.  But nothing will be done in this proposal to decrease the marginal price of gas. I should als mention that this is envisioned as a short-term credit--essentially a form of stimulus--not a long-term entitlement.  It could be structured as a separate line item, or simply as an increase in the standard deduction or personal exemption.
In addition to a household credit, I'm also assuming in this scenario some sort of energy credit for businesses.  I'll leave the details to others, as I'm insufficiently wonky in this area to put together a concrete proposal.

Is it doable?
Don't be ridiculous.  The GOP isn't going to do anything that might be beneficial to Obama's re-election, at least not without exacting a policy price for it.  (And they might even reject an offer of increased production, one sure to annoy liberals).  But that doesn't mean the proposal isn't politically valuable.  Obama has got tons of mileage out of the Jobs Act proposals last fall; even though little if any of his proposals have been implemented.  And a general energy credit would allow the debate to be framed in a way consistent with progressive values:  Long term, we have to kick the oil habit, we all know it.  But rising oil prices are damaging our recovery, as our economy suffers withdrawal pains.  A short-term energy credit, designed to offset the impact of high oil prices, will allow us to continue with an orderly transition to the economy of the future.  The only ones who really benefit from oil subsidies are oil companies.
If the debate is whether Obama is doing enough to drive down gas prices, that's a debate the Democrats don't want to have.  And while progressives might cheer were the President to tell the American public to eat their vegetables, that's probably not wise politics.  But if the debate could be shifted from concerns over the price of gas to a broader conversation over energy, it would be to progressive's advantage--even if the actual policy proposals go nowhere.
Posted by EngineerScotty at 12:36 AM No comments:

A tale of two graphs

I was going to write a longer article on this subject, but I decided to be brief this time.  (And #$!#$ Blogger swallowed my post).  Here are two graphs showing the historical costs, over the past forty years, for two things which Americans buy a lot of: 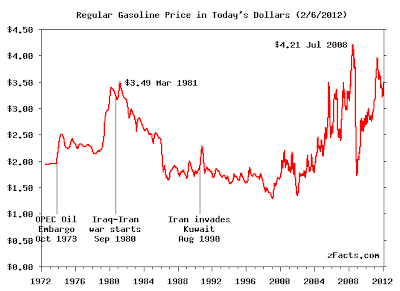 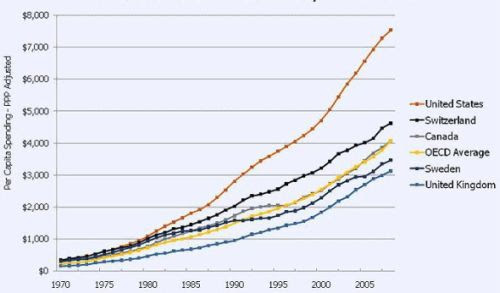 The fluctuating costs of one of these things are treated as a Grave Political Crisis by the vast majority of the US polity, including political actors who normally prefer to leave such matters to the Hidden Hand™--even though, in real dollars, prices are only about double what they were before supply shocks started to hit.  The other is frequently regarded as something that we dare not do something else, lest we start down the Slippery Slope to Socialism--even though the price that Americans pay for it has increased by a couple orders of magnitude.


Which is which, and why, is left as an exercise for the reader.
Posted by EngineerScotty at 11:33 PM 2 comments:

On the passing of Andrew Brietbart

This morning I woke up to discover that conservative blogger Andrew Breitbart had died suddenly at the age of 43.  The media commentary on him and his untimely demise consisted of much praise and eulogy, some circumspection from political opponents--and a fair amount of pissing on his grave.  Most of the glee at his death came from sources that aren't worth commenting on, but one interesting remark came from Matt Yglesias:


Conventions around dead people are ridiculous. The world outlook is slightly improved with @AndrewBrietbart dead

The discussion of this subject is interesting where Breitbart is concerned, as he himself famously and publicly danced on the tomb of Sen. Teddy Kennedy when the latter passed away from cancer in 2009.  Breitbart justified this on the grounds that Kennedy was a particularly noxious bad actor in US politics, deserving of special scorn.

But given the observations of both Yglesias and Brietbart, what are--and should be--the social conventions for dealing with the death of a political opponent?

My personal opinion on Breitbart is as follows:  I disliked much of his work.  I thought his temperament was foul and obnoxious (I'm not speaking of his conservative ideology, but of how he disparaged and held in contempt those who disagreed with him), and some of his journalistic practices sleazy and unethical.  I do not know him personally, though many who do have praised him as a nice guy in person (a remark commonly uttered about our political provocateurs).  I'm certainly not happy to hear he's dead--he's only two years older than I am, and it's rather clear from the circumstances that neither he nor his family were prepared and ready for him to die.  Nor am I about to join in the sort of not-glad-hes-dead-but-glad-he's-gone bile that is frequently offered up when a controversial figure dies.  I was somewhat pleased to hear of the demise last year of Osama Bin Laden--not joyous, certainly, but at least relieved; and I did not mourn the passing earlier this year of Kim Jong-Il.  But both of these men were monsters; Breitbart (and other players in US politics and media), whatever his faults, is not in their company.

But what sort of conduct is, or should be acceptable when someone controversial passes--both in the hours immediately after the death, while the family mourns, and long after the dirt hardens over the proverbial coffin?  Is it ever acceptable to express joy at someone's passing, or to damn them to Hell (or the equivalent in other religious or cultural traditions)?  Is "good riddance" and appropriate response?  What of no comment at all, or invokation of the wise words of Thumper the rabbit?  ("If you can't say sumthin' nice...")  Does it make the pain of the surviving family worse to hear public exultations of their loved ones' passing, or does this matter?

Posted by EngineerScotty at 10:04 AM No comments: