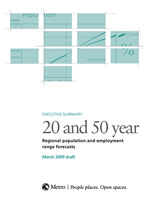 
Of all the documents and data to be found at Metro (the Portland area's metropolitan planning organization), one of the most important something which is far removed from transit, or urbanism, or infrastructure, or economic development, or any of the other nuts and bolts of planning and governance.

Instead, it's the population forecast--the projection of how many people will live (and work) in the metro area at some point in the future.  More specifically, it's the 20 and 50-year population forecasts for the Portland/Vancouver/Beaverton metropolitan statistical area (a seven-county area including Multnomah, Clackamas, Washington, Yamhill, Columbia, Clark .and Skamania Counties).  The current forecast document was published last year, in 2009, and is available for download at Metro's website.  An introductory page (pointing to lots of resources) is here, the executive summary is here, and the full report is here. (A FAQ is here).

The bottom line:
By comparison, the current population of the MSA is about 2 million (1.5 million on the Oregon side of the border, and about 580k in the city of Portland).  The net effect, is that Metro is predicting a doubling of the area's population within half a century.  It should be emphasized that the MSA (a region defined by US government for demographic purposes) includes the entirety of the seven counties above, and thus includes numerous areas outside Portland and its contiguous suburbs.

The importance of getting it right

If these numbers were just for show--it wouldn't be all that important.  But they're not--the population predictions are what drive many of the decisions Metro--and other planning agencies--make.   Population forecasts drive land-use forecasts, which in turn drive transportation forecasts, which drive transit and infrastructure planning.   In other words, much of the plans being bandied about, are based on population forecasts:  Metro, and the other government agencies in the region, aren't just planning to build infrastructure based on our current population--it's planning to do so based on future population.

Among the areas affected by a population forecast are: 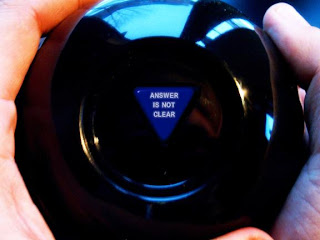 
I am not trained in the science of  forecasting, so I'll admit right away--I'm not in a position to evaluate the report.   However, forecasting is a science--or at least it has a good scientific foundation underneath.  If you have good demographic data for a region, and no major events occur to dramatically alter the demographic landscape, accurate predictions for population forecasts are possible over a half-century timespan.  Of course, having good data is of vital importance; if the data is of poor quality, then garbage in, garbage out.


The accuracy of population forecasts, especially over longer periods, can be improved by looking at economic trends as well.  The ability of a region to sustain a population (and to fund a given level of infrastructure) is limited by the amount of economic activity it can support.  Without jobs, people will generally leave; if there's an excess of jobs, then people move in from elsewhere.

One issue that makes long-range forecasting difficult is the prospect of a "step function" event, which vastly alters the underlying assumptions of a forecast.  Examples of these (in the realm of population forecasting) include resource-based "rushes", natural disasters, acts of war, and long-lasting economic depressions.  As an example, Hurricane Katrina killed less than two-thousand people, but utterly destroyed much of the housing stock of New Orleans.  As a result, the city lost nearly 200,000 residents--dipping to 60% of its pre-storm level of approximately 460,000.  At the present time, New Orleans has recovered to about 340,000 residents, still a significant loss from its pre-Katrina population.

One other issue which may affect the accuracy of any forecast is optimism bias--the tendency of forecasters whose work is affected by the results of the forecast to predict a generate a more "positive" (for the organization) result than might be obtained by a disinterested party.    Even when steps are taken to limit such a bias, it might creep in.  Optimism bias has long been a bugaboo for commercial financial planning--there are thousands of examples of companies which bet big on optimistic growth forecasts which failed to materialize, and went out of business as a result.  Optimism bias is not the same as bad faith, undue management pressure, or fabrication--even persons who intend to be conscientious and objective can fall prey to optimism bias.  If there are deliberate attempts to influence the forecast to produce a desired result, then the forecast has no predictive value, obviously--but that's another kettle of fish. With all of the above in mind, we now look at what is claimed--and not claimed--in the report.   Metro claims that their methodology is scientifically sound, and has produced accurate reports in the past.  Since the forecast was prepared in-house, and since Metro's plans and goals are affected by the results of the forecast, optimism bias might be a concern--that said, I assume good faith on the part of the forecasters.  (There are those, of course, who routinely do accuse Metro and other government agencies of bad faith generally, and of "cooking the books" in order to justify greater levels of funding specifically; other than mentioning it in this paragraph, this article ignores that possibility).
Should we embrace growth?

Given the conclusions present in the report--the obvious question is, what to do about it?  Should we plan for a doubling of the area's population, and build the infrastructure needed to support a local population of 4 million?  Should we hedge our bets?  Or should we say no?

Back in the 1970s, when the state had a much more rural ethic, and the economy was dominated by the wood products industry, Governor Tom McCall famously said that outsiders should come to visit, but not stay.  The thought behind that sentiment, of course, is that increasing population produces increasing expenses, and lifestyle changes which may be unwelcome to some.

The official tune has changed, obviously--nowadays, government welcomes new arrivals to the metro area (particularly if they come with money or with a college degree).  However, there are some who still agree with McCall--that increased population growth will bring on more headaches and expense then benefits.  This is an especially salient issue with the urban growth boundary--the level of urban reserves is such that if population projections were to come true, density of the region would increase, which many view as unwelcome news.  On the other hand, it is often argued that if the population were to level off, then the funds that might otherwise go to new infrastructure, such as the projects and plans cited above, could instead go to making lives better for those who live here already.  Some of the funding sources cannot be repurposed, but some (such as the $250 million of lottery funds which are now alotted to build Milwaukie MAX) certainly can.

One thing to watch out for, however:  depopulation.  While an increasing population is frequently a problem, it's a problem that many cities would love to have.  A declining population, on the other hand, is generally a problem that nobody wants.  When cities grow, they tend to expand--consuming land on the fringe and filling it with development, and increasing their infrastructure capacity to handle the load.  Portland, with our urban growth boundary, has managed that process better than many other cities, but there are of places in town that were farmland a generation ago. 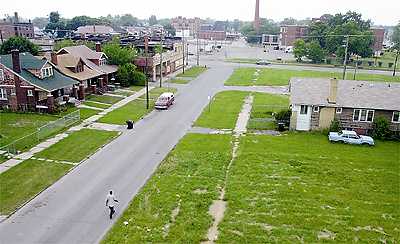 When cities shrink, on the other hand, the reverse does not occur.  Suburbs and freeways don't magically turn back to farmland, and the pavement and buildings can't be sold on eBay to some growing region, producing a windfall.  Instead, cities which lose population start to de-densify, and find themselves burdened with a ton of existing, underused infrastructure (which still must be maintained) and a declining tax base with which to pay for it.  In addition, it's often the wealthiest residents who leave--those with the ability and wherewithall to seek out greener pastures.  Much of the cost of infrastructure scales with the geographic size of a region rather than the population, as the cost of things such as roads, rails, cables, and pipes vary most heavily based on their length.  In the worst case, you wind up with situations such as that facing Detroit, which has seen the recent devastation of the US auto industry, and has long faced the challenge of its wealthy residents segregating themselves (and their tax dollars) in suburban communities.  Detroit, of course, is planning to bulldoze large swaths of the city--including possibly using eminent domain to force people to move out of targeted neighborhoods--so it can essentially abandon providing public services to these areas--concentrating instead on a denser urban core.

Dwight Eisenhower once famously remarked that "in preparing for battle, I have always found that plans are useless but planning is indispensable".  While Metro won't (hopefully) be facing much in the way of hostile action, the same advice applies when it comes to long term strategy:  early commitment to a specific course of action is foolish, but having plans in place to deal with a wide variety of contingencies is wise.  (And as the example of Calgary's light rail system shows, foresight can often produce great rewards in the future). Much of the planning being undertaken by Metro is of vital importance.  If two million more people move to (or are born in) the metro area in the next fifty years, we should be prepared for it.

However, some conservatism is certainly warranted--an excessive buildout of infrastructure that we end up not needing is a waste of money (and can produce results similar to depopulation, as it isn't just the up-front capital costs that matter).  There are plenty of interests who are more than willing to encourage and profit from such waste, and who don't have any stake in the region's long term future--so vigilance, as always, is called for.  And if the region really is expecting another 2 million people to live here, we should make sure that Portland is a pleasant place to live--otherwise that prediction is far less likely to come true.