The Pacific Northwest "Cascadia" corridor is one of ten proposed high speed rail (HSR) corridors in the United States proposed for development in the next couple of decades.  Most of the action in the development has been in Washington State--in particular the Portland/Seattle stretch; where WSDOT has been doing a lot of planning already--and where the rail infrastructure is in better shape than in Oregon.  (The BNSF mainline north out of the Couv is mostly double-tracked all the way up to Seattle).

Which way to go? 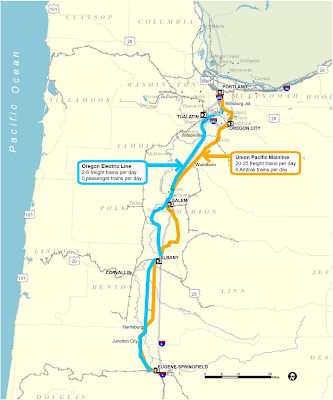 HSR in Oregon is a lot further behind the curve; but ODOT is starting to make progress on the issue.  (Not that they haven't been studying it for decades...) One of the first orders of business is selection of a route--and the two leading contenders are the UPRR mainline (through Oregon City), on which Amtrak presently runs; and the Oregon Electric line through  Wilsonville (WES presently runs on the Tualatin-Wilsonville stretch of this line), connecting to the Newberg branch in Tualatin, and heading through Lake Oswego to Willsburg Junction north of Milwaukie, where it would join the UPRR mainline.

Next week, ODOT is holding a community meeting in Lake Oswego, to bounce the idea off the residents there.  Unsurprisingly, the idea isn't receiving a warm reception--community activists are already lining up to oppose the idea, and citing all manner of NIMBY reasons for not wanting the line.  (The line would not stop in Lake Oswego, merely pass through--it would have a stop in Tualatin).   In addition, the Association of Oregon Rail Transit Advocates (AORTA), is opposed to using the OE line.

One other ideas which have been floated but not subject to serious study, a new HSR route running along (or in the median of) Interstate 5.  One idea I've proposed (but it's just an idea, so don't take it too seriously at this point), would be a connection between Hubbard and Wilsonville roughly along OR551, allowing trains to use the more mature UPRR line in through the Willamette Valley, where the route is unconstrained, and the switch to the OE/LO route in the Portland area, avoiding the Oregon City bottleneck.

According to ODOT studies, improving the OE line to support HSR (which would only run at high speeds in rural areas) would cost $856 million, versus $1.27 billion for the UPRR mainline, and would shave 40 minutes off the trip time.

Both lines would need extensive work to support HSR (and the HSR being discussed is pretty slow compared to what is commonly found in Europe and Asia--but I suppose crawling needs to come before walking).  Both lines are mostly single-tracked with sidings; and the UPRR line (currently FRA Class 4 for much of its length) runs into some serious geographical constraints in the Canby-Oregon City area, where it is sandwiched between the Willamette River, OR99E, and the bluffs overlooking the river.  The OE line has generally FRA classes 1-3, and passes through some residential neighborhoods which would require bypassing in any case.  In addition, a new connection between the OE line and the Newberg branch in Tualatin would be required, as no connection can be presently made between the two lines without a switchback.

That said, the aforementioned 2009 ODOT study has attracted plenty of criticism from AORTA, suggesting that its cost estimates are groundless--noting in particular that many of the improvements to the UPRR mainline included in the estimate, UP will have to perform (and presumably pay for anyway).  I'm a bit perplexed at the harshness of the criticism from AORTA on this subject, to be honest.  On the other hand, I have a bit of a hunch that the OE proposal may be a negotiating ploy with Union Pacific, as the UP has a well-deserved reputation for playing hardball in discussions such as these.

I'll be honest:  I don't care which way HSR goes in Oregon.  The main action in the Cascadia Corridor is in Washington State; until Portland-Seattle trip time is improved, speeding up the Portland-Eugene route is probably doesn't yield much bang for buck.  My preference would be for more frequent commuter service in the Willamette Valley (particularly Portland-Salem) rather than HSR; that said, many of the improvements necessary to support HSR would also enable commuter rail.

One important prerequisite, though, has already occurred (though it hasn't yet taken effect).  In 2008, Congress passed the Railway Safety Enhancement Act of 2008, which mandates positive train control on the vast majority of the US rail network--when this is done, many of the onerous FRA buff strength restrictions (essentially requiring trains running on the freight network be built like tanks) will be scaled back--making passenger rail service (which pays a steep gas-mileage penalty due to the current regulations) more efficient.  The new requirements don't take place until 2015, but HSR in Oregon won't be in place until well after that.