This is part one in a two-part series on my recent trip to China--this covers Beijing.  Part Two, covering Hong Kong, is forthcoming.

Regular readers of this blog (both of you) will note that there has only been one post here in the past month or so.  No, I wasn't run over by a proverbial bus--I was on vacation.

My wife is Chinese, and still has quite a bit of family in southern China (some in Hong Kong, some in Guangdong province in the mainland).  We regularly make hops 'cross the big pond to visit, which involves staying in Hong Kong, one of the world's truly fun cities (and a great transit town).  In addition, we made a side trip up to Beijing (where the Blogger platform, unfortunately, is blocked by the Great Firewall).

Now that we're back in the US, and mostly recovered from jet lag, here are a few interesting observations about both cities, from the perspective of a furriner and transport geek.  This post covers Beijing, a future post will cover Hong Kong.  This post makes no attempt to be a comprehensive guide to the city--google is your friend if you want that. 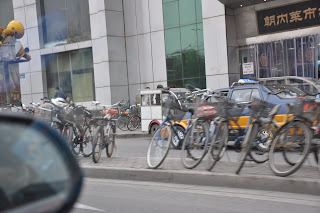 We spent the better part of a week in Beijing.  The city and surround urban areas have a population of about 12 million--about the same size as London, and slightly larger than Paris.  Like these two European capitals, Beijing lies on a large, flat, plain, away from any significant waterways--and is rather spread out.   The city is surrounded by five "ring roads" (numbered 2 through 6 as you go out from the center, don't ask me why), all of them essentially freeways.  The central city lies within Ring Road #2--including most government buildings, the Forbidden City, and Tiananmen Square.   Everything within Ring Road #4 is generally of pretty high density; Ring Road #6 lies outside the president urban agglomination.

These ring roads (which are more square than circular in shape, and aligned with the street grid; virtually all Beijing streets run N/S or E/W) are bisected by numerous inbound boulevards and "expressways" (a term generally used for tolled inter-urban freeways in China).  Generally no freeways penetrate the historic core; another similarity between Beijing and many European cities (and a difference from most US ones).   Despite this, Beijing overall has a freeway system which can give the LA area a run for its money. 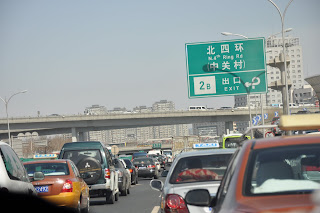 Given the abundance of roads, and the ample room for growth, and the increasing wealth of China, it's not a surprise that Beijing is becoming an auto-dominated city.  Fuel there cost about 6 RMB/liter, which works out to less then US$4 a gallon.  The freeways were frequently jammed, including with a large number of private vehicles--while parking is still an issue (freestanding homes with multi-car garages are not a feature of the cityscape), auto ownership is becoming increasingly popular.

Traffic in Beijing is frequently chaotic, and to the eyes of many Westerners, crazy.  Many maneuvers which would get you booked for reckless driving in the US and much of the West are commonplace in Beijing--passing in between lanes, speeding at highway speeds down narrow alleys, aggressively cutting into traffic, you name it--it gets done.  Beijing has a significant police presence, but I don't recall ever seeing a motorist receiving a citation.  (Nor do I recall seeing any traffic accidents either, so maybe it all works out...)

On interesting difference between China and the US is the classification of motorcycles.  In the US, motorcycles are classified equivalently to cars, and are limited to running on the roads (and not restricted from any).  In China, OTOH, they appear to be classified similarly to bicycles--motorbikes on the sidewalk or in pedestrian zones are commonplace; while many of them are banned from freeways. 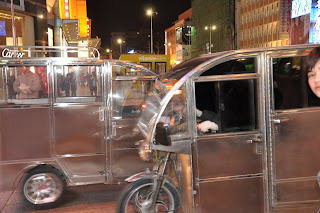 I must confess, we mainly used taxis to get around--mainly due to our in familiarity with the city.  Taxis are dirt cheap to hire there, especially for those exchanging US dollars, and the taxi service has been thoroughly professionalized.  (Make sure you hire a licensed cab, however; there are many unlicensed drivers operating, and many of these are lowlifes who will try to rip you off in some fashion).

In addition to taxis, Beijing also has numerous pedicabs and motorcycle-cabs (the latter being contraptions where a motorcycle is encased in an aluminum shell providing seat for a passenger or two), providing service at bargain basement prices.  These mainly provide service within the heavily touristed areas of the city, and as far as I can tell, are unregulated. 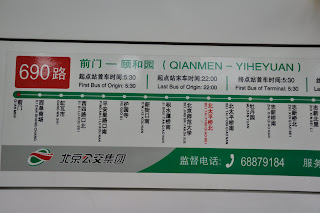 Beijing operates an extensive bus system, which includes a large number of trolleybus lines, mainly in the city center.  The terrain is nearly flat, so the sight of trolleybusses was a bit of a surprise to me (in the US, they're only used in cities with really steep hills).  Beijing also has an extensive subway system serving the urban core, one which is being rapidly expanded.

One of the most interesting things you'll find when you step on a Beijing city bus is--a conductor!  (Or a cashier, if you prefer).  Beijing busses board in the middle, and right behind the door is an official standing behind a counter with a cash register, collecting fares, checking passes, vending tickets, and otherwise making sure you pay for your bus ride.  The driver is free to drive the bus--an important concern in Beijing's chaotic and frequently jammed traffic.  The vehicles were modern and well-maintained, as near as I can tell. 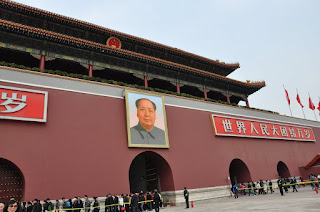 China's rise has been a hot topic of conversation, recently--the government has a big surplus (the government in Beijing would like to extend a warm xiexie to all you WalMart shoppers out there), and is spending lots of money on infrastructure.  Construction cranes were everywhere in Beijing.  One important difference between China and the US is a lack of NIMBY opposition--generally, if the government decided to put public works someplace, whoever is there before has to move.  (And is often times paid a pittance--poor compensation for property condemnation is a common complaint).  The primary Olympic venues in the northern part of town (which now appear to be fenced off) were constructed over an existing neighborhood, for instance--350,000 people were reportedly forcibly relocated. 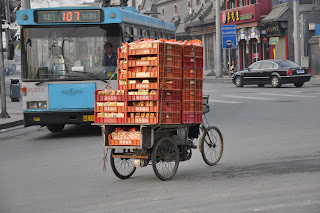 A common theme about China is--labor is dirt cheap there.  Despite all the Marxist rhetoric of the regime's founding, China is a hotbed of laissez-faire crony capitalism (and quite a bit of corruption), with very little in the way of a social safety net.  Lots of people work very hard for very little money, though it's entirely possible to survive there on a pittance--but many jobs which would be automated, or simply not exist in the US, are done manually in mainland China.  As China continues to get wealthy and its middle class continues to grow, it will be interesting to see how the fortunes of the lower classes change. 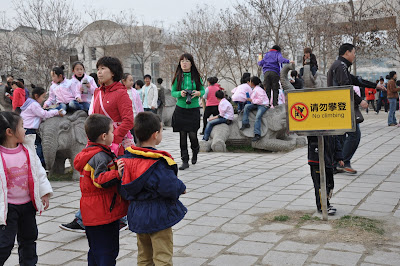 Posted by EngineerScotty at 1:54 AM