Today, it goes without saying, was not a good day for the Milwaukie MAX project.  Only a few days after the projected budget for the project went up by $100 million, the FTA made official what may have been unofficially known to TriMet for about a year; they are only planning to match local funds evenly ("50% match"), rather than contributing $1.50 for every local dollar ("60% match").  The stated reason?  The FTA doesn't want to "set a precedent" for matching big-ticket projects at such high levels.  There's probably lots of other politicking going on in DC, as the transportation bill is stalled in the Senate (like everything!), but given FTA chairman Peter Rogoff's recent remarks about allegedly-overpriced rail projects, I'm not surprised. This decision leaves TriMet about $300 million in the hole--around $470 million of local funding has been located, and 50% of $1.5 billion is $750 million.  According to GM Neil McFarlane, TriMet plans to tighten belts accordingly.   "Over the next few weeks, we'll be working with our project partners to recalibrate the project to fit within these new funding parameters" said McFarlane.  What "recalibate" means exactly is unclear, but according to spokesperson Mary Fetsch, who was interviewed by portlandafoot.com, part of the strategies being considered include eliminating parking garages, shrinking the maintenance facility and not ordering spare cars for trains on the line.

While those steps would save some money, it's hard to see the savings from those moves amounting to anywhere near $300 million.  And its hard to see where additional local funding might come from, given that government agencies of all sorts are dealing with budget problems--and if push comes to shove, MAX is not likely to be the highest funding priority.  If a funding package is not completed by the fall, the project may need postponement--which would put current funding in jeopardy.   Many other projects and constituencies in Oregon have uses lined up for $250 million in lottery dollars--and there's not guarantee that the figure would be made up in a future funding cycle.  (Especially if the GOP manages to retake control in Salem).  TriMet has discussed borrowing more itself--likely bonding more payroll tax revenue, in addition to the $39 million it already plans to contribute via this controversial form of financing--a maneuver which would no doubt make many of its rider base scream.

Not all of this mess is the agency's fault, of course--rail costs have gone through the roof in the past decade; and the current recession seems to have governments all around the country scrambling.  However, the agency has committed a few unforced errors of its own--and has opened itself to criticism that it is over-extending itself.

Unlike a few other projects on the drawing board, rapid transit in the Portland-OC corridor is important for the region's future.  My concerns about Milwaukie MAX chiefly lie around cost, not about the usefulness of the project.  But if the money isn't there, the money isn't there.

Depending on what happens...maybe it's time to revisit BRT.

Consideration of BRT in the corridor is nothing new.  After the Milwaukie/Vancouver MAX funding initiative failed back in the 1990s, Metro gave serious consideration to various flavors of BRT in the early phases of the South Corridor study--a study which initially excluded light rail.  At the request of leaders in Clackamas County, LRT was added to the study, and eventually became the locally preferred alternative for both Phase I and Phase II of the project.  Phase I is now the MAX Green Line; Phase II is Milwaukie MAX.  The South Corridor Supplemental DEIS considered several options for the Portland/Milwaukie/Oregon City corridor, at the following price tags: 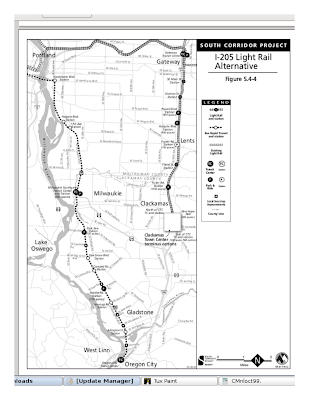 Careful readers will note that the current LRT price tag is 3 times the SDEIS estimate, and that doesn't include any bus enhancements south of Milwaukie.   Pretending the BRT part doesn't exist, that would be about $70 million per mile, about the same cost as the Yellow Line, which was under construction at the time.  The SDEIS glossed over the question of how MAX would cross the river (the maps included had trains going across the Hawthorne Bridge--a dubious notion), but the fact that the project has tripled in price since early planning illustrates the problem.

A few other proposals for a Portland-Milwaukie BRT have been floated, such as this one by John Charles of the Cascade Policy Institute (a libertarian think tank that has a reputation for not being terribly fond of public transit).  BRT was also discussed at portlandtransport.com when the decision to go with light rail was made.  Critics of BRT have noted that light rail "won" the technical analysis to become the LPA--the SDEIS predicted 33% more trips with the LRT solution than the busway, and 60% more than with BRT.   However, given the new project constraints, the prior analysis may no longer be sound.

The Portland/Milwuakie corridor has good BRT potential for numerous reasons:
The support of BRT I envision would be the "busway" alternative, with a fully dedicated bus lane.  In addition, even though it is one of the most expensive components of the Milwaukie MAX project as currently constituted, I would look to keep the Caruthers bridge, as the busway would have the greatest impact if there were a continuous exclusive-transit route between Milwaukie and the mall. (I would also love to see the Milwaukie-OC section added back into the project, even if only consisting of signal priority and queue jump lanes on McLoughlin).

Switching to BRT, or at least publicly considering it, could have significant political impacts as well.  It would demonstrate to TriMet's critics a greater regard for financial responsibility, and help to demolish the meme that "TriMet no longer cares about the bus system"--especially given Neil McFarlane's prior role with the agency.  Such political calculations ought not drive the decision, but it would be ignorant to ignore their potential impact.  And even if TriMet were to go ahead with light rail, it would improve the optics of the situation tremendously.

David Axelrod, President Obama's chief campaign strategist, is famous for saying "never let a good crisis go to waste".  With the financial straits facing the organization, and the greater ability to change direction afforded by a new general manager, TriMet has an opportunity here to greatly change the nature of transit politics in town.  It may be that reconsidering BRT remains a bad idea; and that the correct decision may be to proceed as planned, delay the project until costs come down or money becomes available, or no-build.  But one paradox of management is that constraints can be liberating, as they allow consideration of alternatives that were previously unthinkable.
Posted by EngineerScotty at 12:38 AM