Things that should be automated 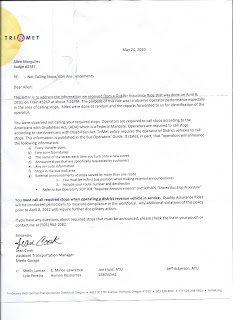 TriMet bus driver Al M, who runs several blogs concerning his chosen profession, today includes a new item--documenting getting written up for failure to consistently call stops on his route.  Al expresses some indignation at this, naturally--noting that bus drivers have lots of things to worry about, such as not running over people--and that this is one more distraction for the driver.

Of course, audible stop identifications are a Federal requirement under the Americans with Disabilities Act (ADA), so TriMet can get in trouble if it isn't complying with the law.

But rather than burdening bus operators with this particular chore--this should be automated.

Of course, TriMet is a bit short on cash right now, and has been reducing service left and right.  Which is why a guerrilla solution may be called for.

We've got lots of cool apps for all the mobile phone platforms (and for various laptops and netbooks) to let you know when the bus is coming--why one which correlates position data from the GPS with route data, and produces audible stop announcements out the speaker?  Why isn't there, as they say, an App For That?

Al, or other bus drivers, can take it along (assuming they don't get canned for "using a phone while driving"), and have IT call out the stops over the bus's PA, so they can focus on driving the damn bus.  After all, automated stop announcements are common on rail transit--and train drivers generally don't have to worry about other issues such as fare collection, obnoxious passengers, or many of the perks which bus drivers get for free.

Of course, I don't expect any transit agency--risk averse as they are--from actually permitting this sort of thing as part of their operations--at least not unless officially blessed, tested, signed, sealed, and delivered.   Might call out the wrong stop and get them sued, or something like that--and when it's an automated gadget that fails, rather than a human operator, it makes it harder for the proverbial sh*t to roll downhill.

But still--this is the sort of problem that ought to be solved with technology.  And if an official solution is not in the cards, and bureaucracy gets in the way, perhaps a visit from Harry Tuttle is in order.
Posted by EngineerScotty at 11:16 AM