A transit hierarchy of needs

Note: Much of the material in this post was taken from comments which originally appeared in this thread at http://www.humantransit.org, Jarrett Walker's excellent transit blog.  It has been significantly edited for the current article.

One famous treatise in the field of psychology is Abraham Maslow's Hierarchy of Needs, which arranges human needs in a hierarchy from basic survival needs (food, water) at the bottom, to more abstract sources of happiness (self-actualization and such) at the top. The paper was controversial when written, and is still controversial, but its influence on the field cannot be disputed.


A hierarchy for transit

A similar model can be applied to many other endeavors, including to transit. I was going to make one up :) (and did so anyway) but then discovered this paper written by researchers at the University of Florida, after surveying transit users. The "Hierarchy of Transit Needs" as documented in the paper, is a five-level pyramid, with the most basic needs at the bottom. The articulated needs (starting with the most basic) are as follows--all text is quoted from the paper.


The questionnaire given to survey participants consisted of a set of questions asking which mode of travel among two choices (each optimizing a given value) participants would choose.  The vehicle type was the same in each question--questions were of the sort "do you prefer the fast bus through the bad neighborhood, or the slow bus through the nice part of town?"  (That wasn't one of the questions; just an example to demonstrate the flavor).  One major issue with the paper is that the survey participants don't appear to be anything near a representative sampling of society.  Survey participants were recruited from a psychology class, a campus listserv, and a local church--and the demographic profile of the respondents was overwhelmingly white, overwhelmingly students, and overwhelmingly childless.  (And geographically limited--the survey was conducted only in two locales; Gainesville, FL, and Savannah, GA--both Southern cities of a similar size to Eugene, OR).  Beyond that, I don't have any particular complaints about the methodology; though I'm not qualified to dive too much more deeply beyond the obviously-skewed sample.

Prior to reading the paper, I had informally come up with my own list--which is based on my opinion and my opinion only, and has no scientific justification whatsoever.  But this is a blog, not a journal, so here goes anyway. :)

Obviously, my list is a bit more fine-grained than the one in the paper. The top of my list (the bottom of my pyramid) is an item (access) that appears to be considered a "given" in the paper. The big difference, as noted above, is the inversion of social issues and "comfort"; but as a self-proclaimed "nerd", I'm perhaps less sensitive to certain cultural attitudes and cues than are most people--or so I like to think.

A few things to note: 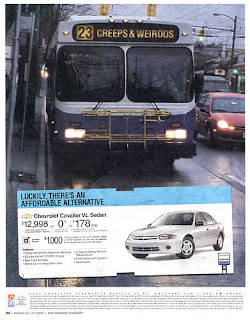 So, what does it all mean, anyway?
Ignoring any particular methodological issues with the UF study, it is worthwhile to ask:  Is this sort of model useful?  I would say yes, with the following caveats:
With those caveats in mind, though, it is useful to keep in mind that the factors which drive passenger behavior (and which planners need to be aware of) are varied and complex.  A proposal which focuses on only one aspect of the hierarchy, even if at the upper levels, is probably going to not be successful.  While it is useful, for instance, to focus only on time-and-distance issues for a particular discussion; actual decision-making will have to be concerned with much more.  How much?  That depends on regional values, and is very much a political decision--not something that can be computed by rote.
A common mistake is to assume that values, or their implementations, are global--this is a common phenomenon in bus/rail debates, where claims like "choice riders don't like busses" are frequently heard.
And in some cases, it is probably desirable to disregard the stated values of some customers--particularly when those values include exclusion or segregation of other customers.  (A common manifestations of the "social acceptance" value is avoidance of persons or demographics considered inferior or suspect--which in all too many cases, means minorities or the poor).
Posted by EngineerScotty at 2:33 PM