The Columbia River Crossing, and the role of state DOTs 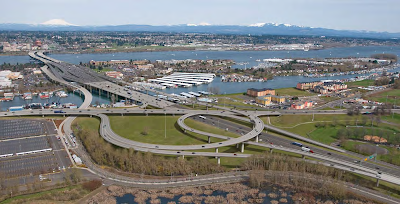 This blog, so far, has avoided serious comment about one of the most controversial projects being considered for the Portland metro area--the Columbia River Crossing.  Recently, I wrote about a blog comment concerning the advisability of adding MAX service to the project, in order to make a point in the bus/rail debate, but I haven't blogged about the CRC itself.  Now, it's time to correct that oversight.

The CRC project organization, which is jointly run by the Oregon and Washington Departments of Transportation (ODOT and WSDOT), recently published a proposed design for a replacement of the Interstate Bridge (an ancient pair of drawbridges which carry Interstate 5 over the Columbia River).  The price tag for the proposed design:  over US$4 billion.  Hardly anybody on either side of the river likes the proposed design, especially in the two cities (Portland, OR, and Vancouver, WA) which are directly affected by the project.

Most people in the community recognize the need to do something.  The Interstate Bridge is functionally obsolete.  It's a major bottleneck for traffic, especially during the afternoon commute.  The connecting ramps are dangerous, particularly the onramps from Hayden Island onto I-5 north, and from SR14 onto I-5 south.  The pedestrian facilities on the existing are downright scary; there's no dedicated transit infrastructure at all, and the bridge must occasionally lift for river traffic.   And the combination of the drawspans of the Interstate Bridge, and the BNSF rail bridge a short distance downstream, make river navigation difficult for large vessels.  There's also some structural concerns:  although the bridges are not yet structurally obsolete, extensive work would be needed to bring them to modern structural standards.  There's a large consensus that the status quo is not acceptable.

But there's little agreement among local stakeholders (even ignoring the DOTs for now) on what needs to be done.  There is rampant sticker shock at the $4 billion pricetag on both sides of the river; and calls to scale back the design--but the sticking point is just what ought to be removed.

We don't need no stinking freeway

Many in Portland's transit and urbanist communities view the Interstate Bridge as an important chokepoint with which to discourage automobile use, and don't want to see any highway capacity added, other than what's absolutely necessary for safety.  Portland's urbanistas, while disliking suburbia in general, hold special disdain for the community across the river which is often derisively called "Vantucky" (and worse), and viewed as a gaping loophole in Oregon's land use laws (and Metro's implementation thereof).  Expanding freeway capacity into The Couv (what Vancouverites often call their city--a term which has the added benefit of only referring to Vancouver, WA and not Vancouver, BC; a persistently annoying ambiguity in the Pacific Northwest) would only encourage more urban sprawl across the river, they say, and the sort of capital flight that has devastated many cities elsewhere in the country.  (More than a few would be happy if the Interstate Bridge were to fall down into the river).

Another concern that Oregonians have, and one less politically sensitive, is the concern that widening the bridge will simply move the southbound bottleneck on I-5 a few miles further south, into downtown Portland--necessitating a costly rebuild of Portland's downtown core.  (In the Rose Quarter area, I-5 reduces to only two lanes in each direction).   And the eastbank freeway, as I-5 is known in downtown, is highly unpopular, and a favorite target of urbanists who would prefer to see it buried (or removed altogether).

We don't need no stinking tolls

Across the river, many in Vancouver naturally resent being viewed as Portland's Oakland.  Vancouverites, like many suburban-dwellers, don't consider their chosen lifestyle to be illegitimate in the least.  Many consider the problems of cities to be the problems of cities--not their concern.  And many in Vancouver are openly skeptical about Portland's famously liberal political consensus (and recently, famously dysfunctional city politics).   They aren't terribly interested in Portland's transit system or enviro-urbanist agenda--and are primarily concerned about the cost of the project.  This is especially important on the Washington side since tolls are a significant part of the proposed funding package.  Vancouver residents enjoy an advantageous tax situation, in that Washington has no state income tax (and very low property taxes), financing government primarily through sales taxes; whereas Oregon has no sales tax.  Thus many Vancouverites cross the river to shop in Oregon.  (Many also work in the Beaver State; though those who do are subject to Oregon state income tax).  Tolling is seen as an unfair surcharge on those who live on the north side of the river; and thus many Vancouverites see reducing the scope of the project--and thus the cost--as a key priority.  (The recent mayoral election in Vancouver turned on the question of bridge tolls; with the incumbent mayor losing re-election to a candidate who focuses on the issue of tolling).

The prospect of tolls also brings about concerns that traffic would be simply shifted to the Glenn Jackson bridge instead; particularly N/S through traffic, and traffic from the E. Vancouver area.    Tolling I-205 was proposed as a solution to this issue (the Glenn Jackson bridge, about seven miles upstream, is not part of the project); however it seems to be the opinion that this is not legally permissible.   This state of affairs in Clackamas County, to Portland's south, worried.

The result of this is that many in Portland want to see the highway features of the design reduced in scope.  A popular alternate proposal is for a seismic retrofit of the existing bridges, removal of many of the interchanges (including the dangerous Hayden Island ramps), and construction of a "supplemental bridge" which would connect Vancouver's downtown street network with Hayden Island and Portland streets such as MLK and Interstate, and provide transit, pedestrian, and bicycle facilities.  Many in Vancouver, OTOH, want the highway capacity, and would just as soon jettison the light rail lines--noting that the tracks would only go a short distance into Vancouver.

The devil's in the DOTails

If the issue were merely a disagreement between two cities (located in two different states) on urban vision, that would be one thing.  But the two state DOTs, who are responsible for maintaining I-5 and have been managing the project, seem determined to build a big megafreeway.  A common allegation is that the acceptance criteria set forth in the purpose and need statement were carefully crafted to exclude any solution other than a big megafreeway, and as a result--a big megafreeway is what the engineers came up with.   And now, the DOTs are (allegedly) playing "chicken" with the project--claiming that it's too late to make any material changes, lest the funding window for federal dollars close (the project is slated to receive funding from USDOT's Corridors of the Future program).  The city of Portland, in particular, is calling that bluff; and actually hired its own engineering firm to review the project.  Metro has been challenging the state DOTs in unusually blunt language as well, with outgoing Metro president David Bragdon suggesting that the CRC project team "get real".

The project's design is severely constrained by several other factors:  the need to maintain a Columbia River shipping channel compatible with the BNSF rail bridge a short distance downstream, and the need to not affect the flight paths going in and out of Pearson Airpark in Vancouver (and to a lesser extent, PDX).   Until recently, Portland mayor Sam Adams also stressed the need for a "signature design" (a demand that the bridge be architecturally significant), a position that struck many as self-aggrandizement and placement of form over function--especially given the height restrictions which prevent the construction of towering arches or suspension systems.  (The proposed design, with box/girder construction, has also been criticized for being ugly).  As Adams has been politically weakened by a sex scandal, this concern has faded to the background, but still lingers.


A major issue with having state DOTs maintaining urban infrastructure, is that many of them are institutionally programmed to the "mobility" side of the mobility-access continuum.  Despite the multi-modal nature suggested by the name "department of transportation"; the primary responsibility for DOTs in most US states is building, maintaining, and regulating highways, often focused on smooth and timely passage of freight.  Other modes of regional or long-haul transportation--aviation, railroads, and navigation (whether on inland waterways or at sea) have long been primarily overseen by the Federal government, as are interstate motor carriers.  Local transportation links (including transit), on the other hand are generally handled by local communities.  Building highways is what DOTs are best at; and this role emphasizes throughput and mobility over local concerns such as access and community integration.  A big problem with freeways, generally, is that many of them don't really serve the communities they pass through; instead they simply disrupt them.


It should be noted that this state of affairs exists despite having relatively transit-friendly administrations in Salem and Olympia.  Democrats occupy the governor's office in both Oregon and Washington, and control the legislatures of both states as well.  While both states have bicameral legislatures (the norm in the United States); both the upper and lower legislative houses in the two states are allocated based on population, not political subdivision.  (Many state Senates, as well as the US Senate;The US Senate assigns equal representation to political subdivisions regardless of population; a state of affairs which allows rural interests to dominate; for example, Alaska and New York each have the same number of US Senators--two).

This project is a classic case of the paralysis that can result when state-level entities such as DOTs manage urban infrastructure projects.  The CRC is a particularly complex case, involving DOTs, MPOs, transit authorities, counties, and cities from two states and not just one.  Given that the project crosses a navigable waterway, is in close proximity to two airports, and even lies adjacent to a national park facility (Fort Vancouver); there are numerous Federal agencies involved as well, including several beyond the usual suspects.  There are many different players, all with different goals for the project, all playing hardball, and no supervising organization with the capability (or the authority) to solve the political conflicts necessary to generate reasonable requirements that are acceptable.   (Kind of reminds me of healthcare reform, actually).  Right now, many of the parties are perfectly happy to not cooperate, and to threaten to block any proposal which doesn't meet their specific needs.  (An ODOT official was actually quoted stating that Portland wouldn't be permitted to expand light rail across the Columbia unless as part of a larger highway project; and of course many in Portland hold the same attitude in reverse towards freeway expansion).

Whether this circle can be successfully squared remains to be seen.  The good news is that the DOTs are starting to get the message, so there's hope that a reasonable design can be produced.  OTOH, even if the DOTs let the two cities and their respective MPOs take the lead, there's bound to be friction given the apparent clash in values.

[Edited for correction as noted in comments]
Posted by EngineerScotty at 12:21 AM